Where do inspirations for books come from? 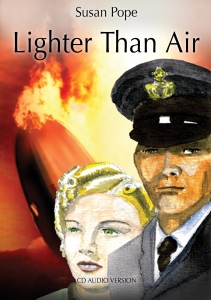 Book cover with my time-slip characters

It is several years since the publication of my debut novel Lighter Than Air, but I am still asked about my motivation in writing a story about giant airships. The writing began back in the year 2000, culminating in its publication in 2008.

Lighter than air is the name given to gasses like hydrogen and helium. They have been used to give buoyancy to balloons and airships for around two hundred years.

In my book, Lighter Than Air, the term is also used in its romantic sense. The love a man and a woman have for each other that never dies. Their love transcends human mortality and moves through time barriers, to continue a love story that is everlasting.

The Hindenburg airship disaster happened nearly eighty years ago and those involved have all disappeared into the pages of history.  I wanted this to be a story that would connect the present with the past and fuse them into one event. To write a modern story that would bring the participants in the Hindenburg’s history back to life.

The Hindenburg airship on its last fatal flight

Also to recreate the atmosphere and magic of those incredible journeys, undertaken by men and women all those years ago, but seen though the eyes of a twenty-first century airman. Lighter Than Air is that creation. The story also re-examines the facts surrounding the construction and operation of the (still) largest man-made form of air transport ever to fly and its terrible demise.

My fascination with airships began in the 1950’s when my family, of which I was the youngest child, went to visit the ‘Gramps’ during the summer holidays. The ‘Gramps’ were my mother’s parents and Grandma’s sister, Great Auntie Sue, (I am her namesake). During our visits to their small, dark, ground-floor flat in Newcastle-Upon-Tyne, where there was no electricity – only gas-light, we children were entertained by these ancient relatives with their memorabilia.

This black range cooker is similar to the one in Grandma’s flat. With the fringe covered mantle shelf.

Exhibits would be brought out from cupboards and draws and taken down from high mantle shelves to be pawed over on the big kitchen table in front of the vast black kitchen range, complete with roaring fire (even in August).     Old photographs, knick-knacks and mechanical toys from the Victorian and Edwardian era delighted our young minds. Amongst the hundreds of old postcards and photographs was one of an airship which Aunt Sue used to tell us the story of the Hindenburg.

As she told us the history of that great floating hotel in the sky, in which passengers travelled to and from America, I imagined them like space travellers out of a ‘Flash Gordon’ movie. (I knew them from visits to Saturday morning pictures.) My eyes became wide with wonder and awe that such journeys had really taken place before I was born. That in ‘olden days’, when many on earth still travelled by horse and cart, there were flying machines shaped like futuristic spacecraft, taking people around the world.

Even though I was only seven or eight years old, I experienced a feeling of connection with this recent past. Space travel was the thing of comic books and films, but this was true – this had really happened.

‘Where did they go, Auntie Sue? Can I still see them?’ 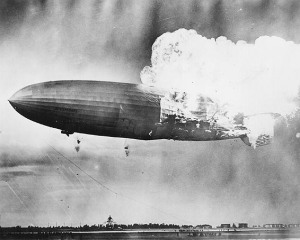 The Hindenburg explodes over Lakehurst near New York in May 1937

Aunt Sue shook her head and looked thoughtful. ‘One day the Hindenburg, the biggest airship the world had ever seen, went to America. But before she could land – POOF! she burst into flames and fell to the ground in ashes.’ Aunt Sue threw her arms up in the air and let her fingers flutter as she brought them back down again.

‘Burnt to cinders,’ she said, pursing her lips in a representation of sadness and shaking her head. ‘No giant airships were ever allowed to fly again; they were all broken up.’

Now, I know this was not quite true, but at that time it was to me like destroying all the spinning wheels, lest the princess prick her finger and die. I remember thinking how sad, destroying all those beautiful floating ships, and secretly I hoped perhaps one or two had been hidden away somewhere.

Aunt Sue brightened up. ‘But now people fly in aeroplanes, so we don’t need airships anymore.’

Even so, I held in my heart the connecting feeling that all this had really happened. I was filled with an almost joyous emotion that the past and the present were all the same time; all one life. That I could reach out and touch the past within my own mind and bring it back to life.

In that moment, I did not comprehend exactly what had happened within me. It would be many, many years before this would truly manifest itself, as the desire, the need to write it all down. This was the story I had to write. I hope others will view Lighter Than Air as the story they have to read. 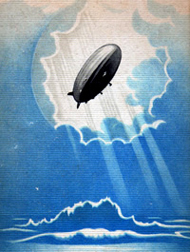 The Airship dream is still alive

Lighter than Air by Susan Pope is available on Amazon Kindle and in paperback. An Audio book version on 10 cd’s read by the author  is also available.